On the 18th December 2019, the School Council along with our Chair of the TTLT Trustees, Margaret Cameron Ratchford, Chair of Ranelagh Governors Rob Sewell and parent governor Rosie Murdoch were allowed a sneaky peek inside the new premises. Our chair of School council, Ruth in Year 6, asked many questions and here is her account.

We were taken into a cabin and asked to put on white helmets; we were actually going to go onto the building site. Up until now, we have only seen the build through the gates and the Perspex windows the builders put in for children to see. I didn’t know what to expect. I know that there will be a new nursery and a playground for the nursery and I knew that we were to have a new entrance for parents. What I didn’t know was the size that it would be. The rooms and the playground are huge and Mrs Lawrenson has already ordered the play equipment and it looks incredible.

Inside, there are many rooms and the architect, a man called Richard Trew, showed us how they would look on a plan. Mrs Lawrenson’s new office has a huge balcony and Miss Welburn was very jealous. I asked why the balcony was so big and the answer was that people opposite would not be overlooked by the school building.

We went up the stairs which is right next to a shaft. This shaft, I was told, will be the lift to the second floor. Unfortunately, we won’t be able to go into the lift, but it will mean that children and adults who have difficulty climbing stairs will be able to access the building.

On the top floor, there is a huge room. This room, said the architect, is what is known as ‘multi-functional’. It will be a place for children with ASD to learn, but can also be a huge drama or dance studio. Miss Welburn gave us an example of a dance (this was very embarrassing).

I asked the school council what they thought of the tour and this is what they said,

The building is fabulous and has a lot of space for everyone to play and learn. All the school council members were extremely excited to have a first look at the new build and to see that the builders are doing a great job.

We are looking forward to the final opening when all will be revealed. As you can see from the pictures, Yasin, 1M5’s School Council representative is tremendously excited as are the teachers and admin staff who had a look round in the evening.

Hopefully, parents will be using the new entrance by the end of March. It’s been a long time in the coming and we thank you for all your support and patience. 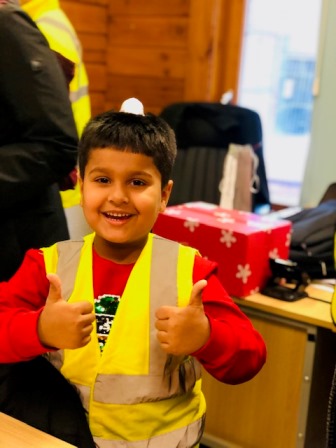 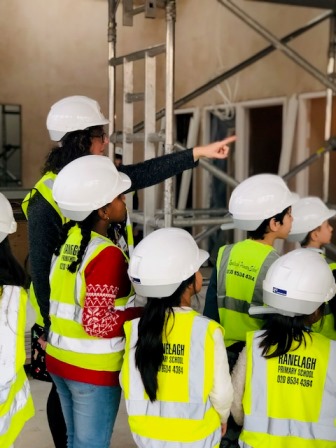