On Friday 2nd November, over 130 girls attended the 1st Girls Active Primary Schools Festival for this academic year. The four activities that the girls had the opportunity to participate in were NFL, Cricket, Hockey and Boxing.

Amongst them were the Girls Active ambassadors from Curwen, North Beckton and Kensington. These girls were a part of a journalism crew. They interviewed other girls and staff members about what they thought of girls playing sport, what they thought about the event and how they could empower more girls to participate in sport. The ambassadors are role models for their school and they have been championing sports within their school to give more girls the opportunity within this field and to put a stop to stereotypic opinions and activities. Furthermore the ambassadors asked the girls to fill in a survey and interview the girls and staff.

Boxing was introduced for the first time with the festival and it was a huge success. The girls stated that “it was really enjoyable” and that “ they didn’t think they could play that sport” This is a sport that we are going to do again as the girls enjoyed it so much.

With Boxing and NFL being such a stereotypic sport, it was great to see the girls get involved and break down the barriers of what comes along when participating in these types of sport. This is what the festival is about. Break down the barriers for girls in sport so there is no pressure, just more opportunities to fulfil their potential in physical activity.

NFL, Hockey and Cricket were introduced again. After the success from the previous festivals and the positive comments from both the girls and the staff, these activities gave them another opportunity to participate in. Many schools don’t offer NFL so it was great to see the girls trying out a new sport.

For the first time, the Girls Active Ambassadors from Curwen and North Beckton interviewed and surveyed the girls and the staff. These girls have been championing sports within their schools and looking at how they can be role models by empowering other girls to do the same and get involved.

From one of the interviews, girls form Curwen primary school said that they “felt great , excited, brave” for trying out boxing and would like to do it again.

One girl from North Beckton stated that “girls can do anything they want if they put their mind to it”. This is really positive comment and this was demonstrated throughout the entire festival.

This is going to continue with the next two girls Active Festivals and will continue throughout the academic year within schools and across the trust.

At the end of the festival, 4 girls were chosen from each coach who showed teamwork, determination, sportsmanship and girl power. They each received a cricket set from the women’s cricket world cup.

A huge well done for all the girls that demonstrated that “This Girl Can”! 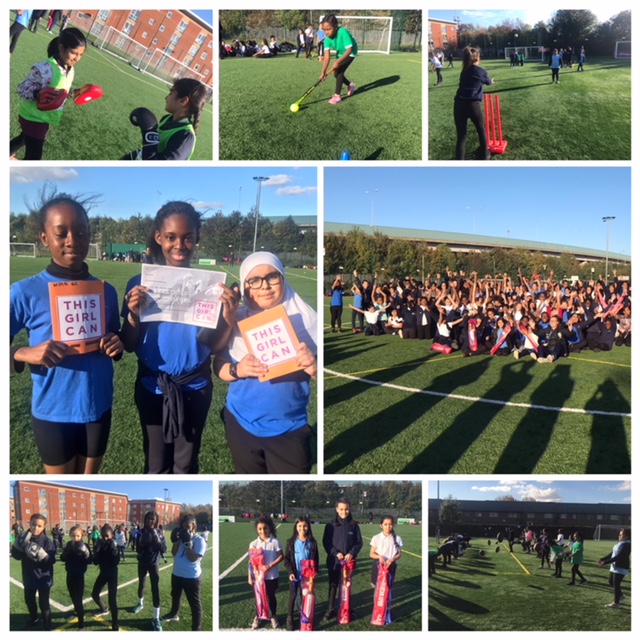